In the early 20th century it was decided that a separate prison for women should be built in Kingston. Until this time female inmates were housed in a separate section of the men’s Kingston Penitentiary (in operation since June 1, 1835).

What did women do in the early 20th century to be imprisoned?

The answer may shock you. The Province of Ontario’s Female Refuges Act stated that “any parent or guardian may bring before a judge any female under the age of 21 years who proves unmanageable or incorrigible.” This meant that young women between the ages of 16 and 35 who had children out of wedlock or sex with non-white men could be incarcerated without a trial.

Construction began in 1925 on a new prison to house female inmates. Labour was provided by inmates from the Kingston Penitentiary.

The new prison was necessary as by 1927 the number of female inmates in the Kingston Pen had risen to 40, exceeding capacity. The overflow prisoners had to sleep out in the corridors.

A sixteen foot limestone wall and barb-wire surrounded the facility to deter anyone intent on escaping. The fencing was approximately 23% of the total budget to build the prison. The total cost of construction of the prison was approximately $374,000.

The Prison for Women was a maximum security prison where women were sent for federal time (2 years or more). 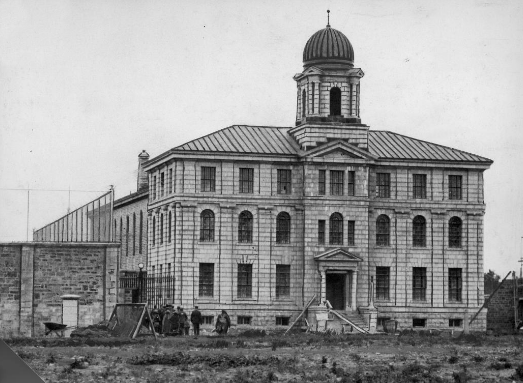 In 1947 Ralph B. Gibson, Superintendent of Penitentiaries, chose to focus on the education of female inmates. This meant that P4W now had an Educational Matron, a person to teach programming at the prison.

Inmates were taught skills including sewing, cleaning, cooking and child rearing. Some staff even brought their children to the prison while they worked, allowing the inmates to care for the children.

In November 1949 a typewriter was purchased for inmates to learn how to type on. Months later additional typewriters were purchased. Inmates could enroll for an hourly session to learn.

Between 1950 to 1952 prisoner’s recreational activities were improved including Christmas and Easter concerns and creating a women’s softball team. Tennis and volleyball became popular recreational activities. Inmates were also able to watch motion pictures at the prison, paid out of the Inmate’s Welfare Fund or by supporters outside of the prison.

The library was expanded, typing classes and stenography classes were offered. In January 1952, a beauty parlor was established with the purchase of second-hand wash basins, dryers and chairs.

In 1956-57, a “pre-release program” was carried offered. The program allowed an inmate to be picked up at 1 PM and escorted to stores, grocery shop or for a drive. The inmate would then be returned to the prison by 4 PM.

In 1962 a “Housekeeping Cottage” was added to the property. This was where women could enroll in a six week course on home economics incluing budgeting, cooking, etiquette and cleaning. New recipes were tried and the women would eat the meals together at the table. Appliances and furniture were provided, just as you’d find in your home. The course was so popular that there was a waiting list.

When did the Kingston Prison for Women open?

Where is the Prison for Women in Kingston?

The Prison for Women is located at 40 Sir John A Macdonald Boulevard. It’s not to be confused with the Kingston Penitentiary which is a separate building.

Is the Prison for Women abandoned? Haunted?

The Prison for Women in Kingston is closed. It’s been purchased by Queen’s University in 2008 who in turn sold it to ABNA Investment Ltd.

It is not known to be haunted although it has a controversial background.

When did the Prison for Women close?

Despite the programming for women, the P4W had a lengthy record of complaints and controversy.

In fact between 1938 and 1978 eleven out of twelve Government-appointed groups recommended that the P4W be closed and the inmates sent elsewhere.

1) In 1938, only four years after opening, the Archambault Commission was shocked at the appalling conditions of the Prison for Women and concluded that P4W should be closed and the offenders returned to their home provinces.

2) In 1977 the MacGuigan Report described the prison as “unfit for bears, much less women.”

3) During the 1960’s the prison administered LSD and electroshock therapy in an effort to “alter the criminal disposition of inmates”. A lawsuit was filed in 1998 on behalf of the women involved.

4) Between 1989 and 1991 five Aboriginal women died by suicide. Families often lived too far away to visit inmates. In 1990 a Federal task force recommended the closure of the Prison for Women.

The Elizabeth Fry Society had long lobbied vigorously for change, believing that the prisoners were too far away from family and unable to benefit from morale boosting visits.

On April 22 of 1994 there was a brief violent confrontation involving six prisoners and guards. The women were segregated and criminal charges filed. Two days later a hostage taking took place, a slashing and an attempted suicide.

The morning of April 26th guards protested outside the prison demanding that the six women be transferred out of the prison.

The same evening the Warden ordered an all-male task force from the Kingston Pen to extract eight segregated women from their cells and to strip search them. The men forcibly removed the women’s. One women’s glasses were crushed under the boots of one of the ERT members.

On May 8, 2000 the last prisoner was transferred out of the P4W and it was closed. The property was purchased by Queen’s University in 2008 but decided to sell it in 2017 after not being able to find any use for it. ABNA Investments Ltd. has purchased the property.

The Prison for Women once houses Karla Homolka whose crimes I won’t give publicity to here.

Thank you for looking 🙂