Beautiful Colonial Mansion in OntarioJuly 26, 2020 Talking Walls Photography
Mansions & Luxury
0 Comment
As we approached this location, I did the customary drive by to scope it out. We parked down the street and I walked in alone first, so it would be less conspicuous. I went around back and found an open door. Once inside I texted my partner to come on in.
I began taking photos of the pool area first, in the eastern part of the house. The kitchen has a somewhat aged look, with an old analog drum clock display stove (before digital clocks). The floor has many droppings of what appears to be mice poop. It’s evident that this house hasn’t been lived in for quite some time. In the photo of the dining room table you can see a significant amount of dirt on the floor. I observed cobwebs in the dining room (as seen in the video). Next to the kitchen counter is a small seating area with a wooden table.
The stove and appliances aren’t modern but they aren’t decades old either. I’d estimate perhaps from the 1990’s. There are dishes and cutlery to be found in the cupboards.
As was common in older homes, there are room-to-room intercoms which served as today’s texting device for sending “come to supper” messages.

Perhaps half an hour into this exploration, my exploring partners told me that they were heading back to the car. Apparently the house was a little too modern for their tastes and I suspected they were nervous exploring the house. This detail will be important shortly.

I worked my way upstairs. In the master bedroom, I discovered a huge colonial bed (discovered? It had been there all along so I didn’t actually discover it). There were several pizza boxes on the bed which might have suggested that a squatter had been living here. Another explorer who’d previously explored this house, said that during his visit, he heard someone go hide in a closet. Whomever was staying here was not present when we visited, or if they were, made no sound. Now at this point of the tale, I heard a banging as someone was trying the front door. “Okay, my explore partner has come back and wants in the front door”, I thought. Fortunately I heard the noise. If I were in the pool area, I’d have not been able to hear it. I looked down to observe someone peering in through the front window next to the door as he tried the door handle. My heart went through my chest. It wasn’t my exploring friend. I managed to take one last photo of the immaculate bedroom below as I made my swift exit. 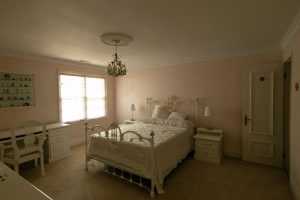 Hoping that the man was still in the front of the house, I would make like I was taking photos of the exterior when he turned the corner to see me. I exited the house and closed the door behind me. I immediately noticed a Chinese man dressed in shorts and polo shirt. He was trying the doors to see if they were locked. I noticed him before he noticed me. I instinctively said hello to him. He asked what I was doing here.

Here’s an approximate version of the conversation that transpired:

He mentioned a few times that this was ‘wrong’ and didn’t understand why someone would want to take photos of his old house.  The man wasn’t angry but he was concerned. He mentioned that the screens from two windows were on the ground and asked, “Would your fingerprints be on them?” to which I replied, “No. I didn’t break in.” This was the truth.

The conversation went on for a few minutes. Usually these conversations end with the person advising you to leave, and you part ways.The man then said, “I have to call someone.”

Now I’m not the type of person to run. I much prefer to have a civil conversation, take some verbal heat and part ways. This conversation wasn’t heading that route. The man wasn’t going to let it slide. So with that, I pushed in my tripod legs and began to walk out to the front of the house. I turned around once to observe him filming me with his camera.

I wondered if someone had phoned him, possibly having seen us go into the driveway. Not wanting him to see the car’s licence plate, I walked down the street as if heading to a side street. I looked back to see him following me on the other side of the road. “Why are you following me?”, I asked with a mix of annoyance and concern.

Realizing that this wasn’t going to end well, I decided the best approach was to walk to the car where my two companions were waiting on the curb. I said, “Get the F-in the car” and tossed my gear into the back seat. As I pulled away, the man inevitably took a photo of the car. And that’s the last that I saw or heard of the incident.

So is this house actually abandoned? No.

It, like so many others, has an owner who happens to not be residing in it at the moment. This property has an overgrown driveway. A shutter is dangling beside a window. There are significant mouse droppings and cobwebs inside of it. You could easily take it for an ‘abandoned’ property.

However is anything truly abandoned? If you don’t own it, the bank does.

P.S. There’s the slim possibility that the man who appeared at the front door was a concerned neighbour rather than owner, and the person he said he “had to call” was the real owner. I say this because the man didn’t attempt to open the front door with a key.

The house falls under the umbrella definition of ‘abandoned’ that we use in urban exploration.