The London Psychiatric Hospital grounds now consists of 23 buildings including the Chapel of Hope church, horse stable and infirmary building.

The London Asylum for the Insane opened in 1870. In 1869, the provincial legislature provided $100,000 in funding to build the asylum. The asylum was built upon 300 acres of land in what is now known as Highbury Avenue. The asylum was ready to accept patients in November of 1870.

The main building featured a number of wards for different patients. There were wards for paying patients and free wards. The paid wards offered more comfortable surroundings and private rooms at a rate of between $1.50 and $2.75 per week. The number of patients who used the paid rooms was quite low.

Male and female patients lived apart but were able to socialize. Patients staying in the North Ward were confined and not able to move around the asylum,

The Medical Examination building opened in 1903, and offered dormotories and individual rooms. There were sunrooms where patients could relax. You can see where the sunrooms used to be at the leftmost part of the existing building today.

The original facility was named The London Asylum for the Insane. In 1932 the name was changed to the Ontario Hospital for the Mentally Ill. In 1968 it was renamed the London Psychiatric Hospital (LPH).

The Chapel of Hope is located behind the main hospital building. Thousands of people have been married inside this scenic chapel, which became the property of Infrastructure Ontario after the hospital ceased operations.

Before the chapel was built, religious services were held in the general recreation facilities which was up three flights of stairs. This raised concerns about the elderly not being able to attend. In 1884 the church was constructed in a Gothic Revival style. The labour was provided by patients. The church was part of a plan by Superintendent Dr. Richard Maurice Bucke to create a beautiful grounds to help improve patients mental health. He petitioned Public Works Ontario to build the chapel. Both Protestant and Catholic services were held at the church.

Interestingly, the chapel was built with both a Roman Catholic and Protestant alter at opposite ends of the church. The pews were designed so that they could face either direction. When the Protestant congregation needed more space to worship, the church became Catholic.

The stained glass windows combine images of religion with images of the Asylum which at the time reflected religions role in moral therapy.

In 1970, the Chapel was renamed the Chapel of Hope and various rejuvenation projects were undertaken to restore the inside of the Chapel to its former glory. 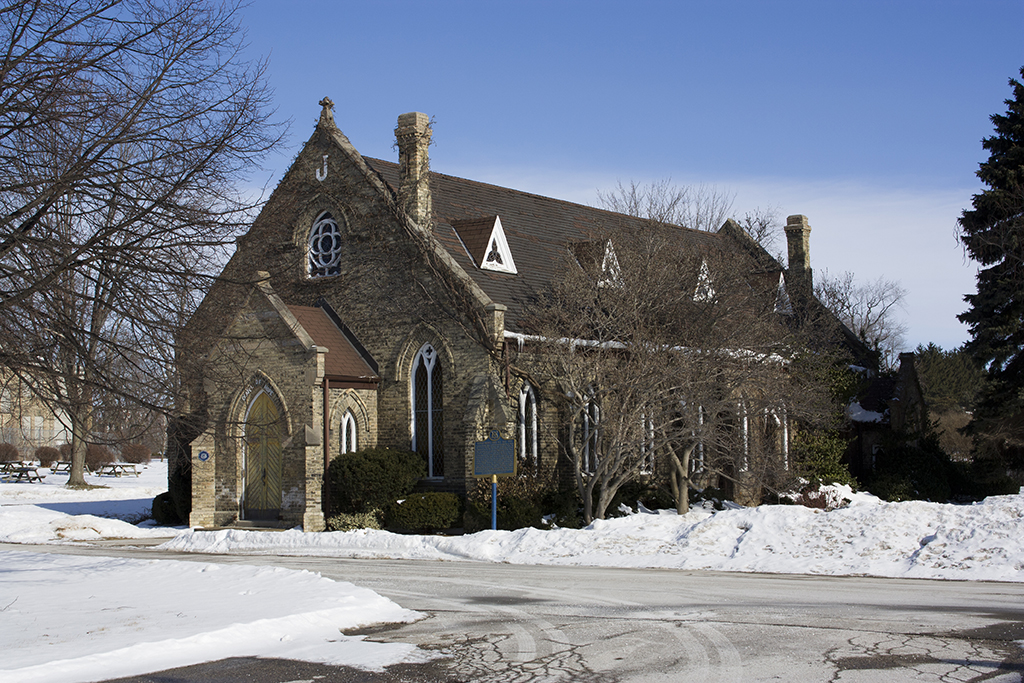 In it’s last years of use, weddings at the chapel were booked by volunteers. The church had room for approximately 200 guests. The horse stable was built in 1894, ten years after the construction of the church. It features distinct ventilation cupolas on the roof. The structure is in poor condition with the roof and top floor rotting.

The two-storey recreation hall was built around 1920. It features gable ends and on each side of the building are two small wings that jut outward, with pedimented gables. The windows are set in semi-curcular brick panels.

The London Insane Asylum opened on November 18, 1870 and was the first of its kind in Ontario. At the time of the 1871 census, only five areas of Ontario had enough of a population to be considered a city. They were London, Kingston, Ottawa, Toronto and Hamilton.

The London Insane Asylum was built at a cost of $100,000 to house patients from other facilities that had undergone restructuring and amalgamated their facilities. Some of the patients arrived from areas including Orillia and Malden (near Windsor).

The London Insane Asylum opened with a capacity of 500 beds, which were instantly filled.


Mental health practices up until this time were questionable, often horrific by today’s standards. It was believed that a patients mental state could be re-balanced through physical shock, whipping, burning and physical restraint.

The 19th century saw more humane approaches to treatment of people with mental health issues. One such approach was that of Moral Therapy. Moral Therapy focused on improving care but also looked at teaching social norms and work habits. To help patients integrate back into society they also worked in some capacity at the facility. Men would work the gardens while women would learn to sew.

The long-term outlook was just that – long term. Once incarcerated, almost 50 per cent remained in the institution for more than ten years.

He didn’t perform any further surgeries until 18 years later.

Female hysteria was a diagnosis for women who exhibited anxiety, fainted, nervousness, sexual desire, irritability or sexually forward behaviour. Some families would commit their daughter to an asylum in order to save their family’s reputation.

Bucke adopted the popular Victorian idea that the female reproductive organs were connected to emotional and physical well-being, and were thus the most likely cause of mental illness. By removing the affected organ, by curing the body you could cure the mind.

Between 1895 and 1901, Dr. Richard Maurice Bucke performed over 200 surgeries on female patients in an effort to cure their hysteria. This included 12 removals of “diseased” ovaries and tubes, 21 for minor uterine diseased and 8 for vaginal lesions. Critics called his actions the “mutilation of helpless lunatics.” (J.Hillhouse)

Dr. Bucke along with other superintendents rallied to have the title of their institution changed from asylum to hospital. This was to reflect the role of the physician rather than one of being custodial – which asylum suggested.

These operations were largely discontinued after Bucke’s death in 1902. In February 1902 it’s alleged that he paused to gaze at the stars one winter’s night and lost his balance, and died from the resulting head injury. 44 Responses to London Asylum for the Insane – London, Ontario